‘Hello Alison,
Sorry it’s taken so long but we’ve only just had a chance to listen to your new CD, and happened to be in the company of Keith Kendrick and Sylvia Needham while we were doing so. We all agreed that it’s a superb album, of which you should be very proud indeed. A huge variety of songs and some very neat singing and playing. Well done, both of you.’

‘We’re very interested in seeing a little bit more of Alison and Jack – a good album – really nice, clear – I was going to say plain but I don’t mean plain in a negative sense – it’s kind of pure, in a very sonic sense, very interesting, a lot of respect paid to the tradition I think.’

‘In 2014 Alison & Jack released an album called Half Hands Round, which took a gentle meander through the traditions of English folk, and along the way picked up a fair number of positive reviews, not least from ourselves..’
Read more

‘Adzooks! is a thoughtful, peacefully sublime album. The twelve tracks have the engaging habit of creeping up on you and burrowing into your mind – with Alison’s solo vocals and Jack’s delicate, considerate playing, their repertoire could be described as totally minimalist, starkly pared down to suit a musician and singer. Please check Alison and Jack out – you won’t regret it.’

‘Now whatever brand of folk that you like, that you’re into, there is something for you on this album, it’s an absolute gem. I’ve been very, very impressed with this, and grateful to A&J for sending it through to me.’

‘They’re one of those pairs of songwriters who’ve got the knack of writing things that sound authentically traditional, but they’re not, d’you know what I mean? Some people try to do that, try to write their own traditional songs, and the results are not altogether pleasing, but Alison and Jack get this sort of matter sorted out very well indeed.’ 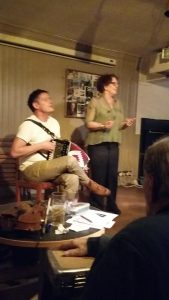 ‘I came to this CD at the end of a long and frustrating day, not expecting much, but it really lifted me and I own up to being very agreeably taken with it – in fact, it’s one of the most enjoyable and worthwhile releases I’ve been tasked with reviewing this quarter..’
Read more

This is a charming CD from two highly competent performers. Just over half is traditional songs and the rest self-penned in traditional style plus one music hall item from composer/performer Frank Wood. The traditional sources are varied, the versions interesting and the self-penned songs strong, including one tale of transportation set to the tune of Gilliver, a Roger Watson song that featured regularly in our Muckram Wakes sets of yesteryear. It’s good to adopt and adapt! The production is naturalistic with plenty of dynamics and devoid of the smoothness which often slides out of studios these days. Favourite track? The Whitby version of Scarborough Fair. Excellent stuff.

‘This is a joyful collection of songs. Alison effortlessly switches from lament to morris to more bawdy tunes. Jack’s lively engaging work on concertina and melodeon is the perfect foil. Occasional backing-vocals, piano, whistles and spoons add highlights as the tracks switch between cheerful and dark. The simplicity of the production and performance reinforce the whole – this is folk at its basic best.’