Bob’s CD gets another thumbs up! 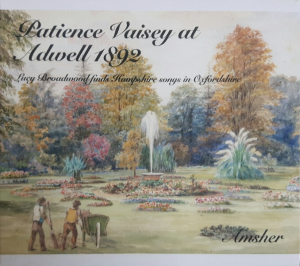 This worthwhile CD features the songs collected by Lucy Broadwood from 45 year-old Patience Vaisey, former servant and wife of the gardener at Adwell House in Oxfordshire in 1892, researched by Bob Askew. Patience learned her songs as a young woman in Hampshire and would have sung at home and probably while working. They are mostly, but not entirely, love songs and it is very rewarding to experience this repertoire and to hear the songs sung simply and directly. Some of them are variants of well-known songs, such as the hugely popular Banks of the Sweet Primroses and The Oyster Girl, others are a bit less well-known, like Jenny of the Moor, and some are quite rare like Oh Why Was I Born to Be Tormented So. And there is a very nice version of We Are All Jolly Good Fellows. But for me, the delightful surprise was the two hunting songs that sound as if they were from glee clubs, When The Moon Stands On Tiptoe and How Sweet In The Woodlands, somewhat reminiscent of the singing of Ron and Bob Copper, and well sung by Alison Frosdick.
The three singers, Alison Frosdick, Annie Winter and Anna Baldwin have remarkably similar voices , though this may be partly the effect of the microphones. The performances are gentle, careful and precise and the voices are those of women, not little girls. Most of them are unaccompanied but what little accompaniment there is is well-judged, particularly Jack Burnaby’s piano.
Collections like this remind us how much there is still to find in the English folk tradition and how it evolved. Amsher’s ambition was to present the songs as Patience might have sung them. This is a very credible and creditable attempt.