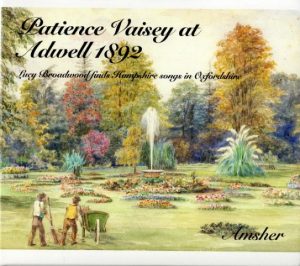 Couple of reviews for the Patience Vaisey CD over the last few weeks from Mardles and Folk London.

‘This little gem of a CD is full of delightful songs and singing. It probably not your cup of tea if you like loud backing and lots of instrumental accompaniment, but if you like an intimate song with minimal interference from backing musicians, this is right up your street. John Dipper who was the technical brain behind this deserves credit for a superb end product. Bob Askew,the mastermind behind the project, is a svengali of the highest order.

Lucy Broadwood visited her cousin Herbert Reynardson in 1892. He lived in Adwell House, Oxfordshire. The gardener’s wife, Patience Vaisey was a Hampshire lass and sang her repertoire to Lucy, probably very gladly because her husband the gardener at Adwell didn’t like folk songs preferring instead hymns Ancient and Modern. There’s no accounting for taste!

The songs are performed here by a select cast of Southern singers. Annie Winter and Alison Frosdick are well known on the trad folk circuit, being regulars at Whitby and other trad festivals. This is the first time I have come across Anna Baldwin and Jack Burnaby who supplies the minimal accompaniment on piano and concertina. His piano playing is very in keeping with the sort of parlour music Lucy Broadwood would have been used to. I was most taken with his little riff at the beginning of When The Moon Stands on Tiptoe. This is a glorious hunting song which is ambiguous in its quarry – human or hare!

There are many songs here that would benefit from more exposure. Many of us know , or at least have heard, My Bonny Bonny Boy, but how many of us know How Sweet in the Woodlands? We have a huge wealth of songs that were collected because somebody out there thought they were worth preserving. Let’s get them out there into the folk consciousness. This collection deserves to be much more widely performed.

Thank you to Bob Askew for your dedication to your local heritage. It is a grand job you are doing. Keep plugging away!’

‘This appears to have been a labour of love on the part of Bob Askew, carefully tracking the songs of one of Lucy Broadwood’s source singers, Patience Vaisey, a project which has here come to fruition following a decade of diligent research.

Lucy Broadwood collected sixteen traditional English folk songs from Patience Vaisey publishing only five of them. Bob spent years tracking down texts for the remainder, no small undertaking bearing in mind that internet sources such as ‘The Full English’ and ‘The Roud Index’ are comparative recent research tools.

Although her repertoire is made up almost entirely of love songs, the range is exceedingly varied. Those involved have tried to ‘give the recording the feel of Patience performing in her cottage with occasional choruses from friends’ and performances have been well-organized so that there is both alternation between the three singers and the content of the songs.

The songs themselves prove an interesting mix of unfamiliar variations of familiar songs and songs which have all but been forgotten while two songs The Banks Of Sweet Primroses and My Bonny Bonny Boy, on which Anna accompanies herself, to great effect, on the fiddle, remain familiar folk club fare.

Though a familiar story, the version of The Oyster Girl, collected from Patience is unsurprisingly not the familiar bawdy tale, the pocket picking taking place not upstairs in the bedroom but in full public view. When The Moon Stands On Tiptoe and the inimitable How Sweet In The Woodlands are two of the three songs accompanied by Jack Burnaby here given the drawing room treatment with some compelling piano playing, while on the completely unfamiliar Among The Green Hay, attributed to Patience but discovered by Martin Graebe in the Baring Gould collection, Jack provides skilfully understated concertina playing. It is a song in which some of the words are sung letter by letter, and along with the wonderful Nothing Else To Do suggest a great sense of fun. I was particularly taken with two songs not found outside Patience’s repertoire Oh Why Was I Born To Be Tormented So and The Garland Of Love, charming but differing love songs, the first being of unrequited love, the woman continuing to love her false hearted lover, the latter a positive reflection on a current relationship with a really gorgeous chorus.

An informative eight page booklet is included with this engaging insight into the repertoire of an ordinary working class ‘Amsher’ girl.’